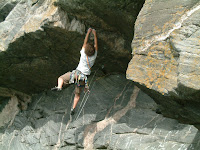 Over the last 2 months EICA: Ratho have been testing a selection of holds from the latest climbing hold manufacturers on the block - Extreme Dream Holds. These holds are no ordinary climbing holds. They are made from moulds taken directly from real rock at the crag and they are made from a resin mix that has been fine tuned to create exactly the same texture as the rock type they are designed on. I have to be honest and say that I have taken the blind fold test for each range of rock type hold that they produce and I cannot tell the difference between Extreme Dream Holds and Rock. These holds are nothing like any other holds on the market and I feel are definitely an interesting addition to the selection of holds we already have at on the walls at Ratho. Route setting with these holds is very enjoyable and the range of different and random shapes make it possible to set extremely challenging and hard to read problems and routes.

We have two full Extreme Dream routes in the centre for everyone to test their route reading skills on. The Main Top Roping Wall is home to the blue F5 on line 78. This is set from the Extreme Dream Gabbro range and offers some cool bridging and mantle shelf action. The other route is set using the Grit-stone range and offers some powerful and technical climbing up the middle arete on the old comp wall. The Green route on line 39 was set as a qualifying route for the recent British Team Trials. The nature of this range means that it is extremely difficult to read moves from the ground, which resulted in some rather sketchy moments during the trials. Both of these routes have proved extremely popular, and we have received some very enthusiastic and positive feedback from members who have tried them. If you have not tried the routes yet, get stuck in and let us know what you think of them. Be warned though these holds come with an extreme friction warning and it is advised that you adopt a slow, precise and controlled climbing style when attempting them as thrashing or snatching will only be rewarded with skin loss!

Check out the website if you want more info on these climbing holds: www.extreme-dream.com

"a very welcome break from the mundane blob pulling experience that is rather too common these days. Every climbing centre should have at least a few routes of these!"
Dave Macleod
Posted by neil mcgeachy at 15:50