Alan Cassiday is a top Scottish Sport climber and competition climber based in North Spain. He is a member of the British Senior Lead Climbing Team and recently achieved a 4th place finnish in the British Lead Climbing Championships (BLCC's), which were held at EICA: Ratho on the 18th & 19th of July earlier this year. In the article below, he gives us a run down of Scottish success stories at both the senior and junior BLCC's and the BBC's (British Bouldering Championships).

Scotland's young climbers' training seems to be paying off at both the British bouldering and leading championships. All the young Scots put in great performances on the day with some very positive climbing and showing of the talent that lies in abundance these days north of the border.


Nat Berry made the smooth transition from Junior to Senior taking the BLCC crown at Ratho with consumate ease. Mutant only just describes Jonny Stocking who did the deed in the junior males at both the BLCC at Ratho and the BBC in Sheffield. He was joined on the podium by another young Johnny, Jonathan Field this time who's training paid off with a fabulous 2nd place in Sheffield and was only denied 3rd place on the BLCC podium by the presence of a foreign vistor in the form of Israeli climber Alon Gurman who took 2nd place.

There is great strength in depth in the junior field with the list. Ellen McCaskill took 4th and 6th at Ratho and Sheffeild respectively and was joined in the EICA: Ratho final by an up-and-coming name; Eleanor Hopkins, a strong tip to take on the mantle of Nat Berry in the future. After less than a year of starting to lead climb she grabbed 6th place. By all accounts both competitions had great showings from all the other Scottish juniors.


In the seniors Ross Kirkland’s battle with qualifying route 2 was great to watch and as young climber continuing to improve the future is getting brighter in the senior competition too. As for the more senior seniors, Roddy Mackenzie put a few demons to rest and got into a well deserved final at Sheffield where he finished 6th and Alan Cassidy surprised himself and many others with his 4th place at EICA: Ratho.
And for those who say "but what have they done outdoors?" the answer is quite a lot really! The highlights (but by no means the only things going on) belong again to Mr Stocking; flashing 8a with Mussel Beach at LPT and working his way through the trad. Onsighting E5 is a doddle E6 has been ticked and the Brandler-Hasse has also been dispatched...the future is in safe hands. 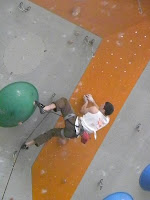 Ifyou would like to read more about Alan's climbing adventures, you can do so through visiting his blog;
http://alancassidyclimbing.blogspot.com/2009/08/on-road.html

If you would like to check out some more images of the recent BLCC's at EICA: Ratho go to http://www.dbm-photo.co.uk/photo3220958.html
Posted by neil mcgeachy at 06:41