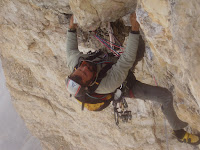 
After a conversation with Neil near the end of the winter season about the climbing he has been missing out on by sports climbing and cragging mainly in Britain, we got talking about the dolomites. By the time we had finished we were checking rotas, and had an objective, the Brandler-Hasse on the Cima Grande. At an apparent E5 (7a+) and one of the most sort after routes in the Alps, it was going to be good. After a few weeks talking about the trip we thought that it would be a good opportunity for Johnny to experience something different. Secretly, it was nice to have another rope gun along. This would be the first alpine experience for both of them, and what a place to start. So, the team was set, the goal an exciting and challenging one and training about to start.

Being the weakest link in the trio I was keen to get as fit as possible after a good winter season. Things started well, straight back on E3 to get the head back in gear and ticking 7b+ as the first sport route of the season. I couldn’t have hoped for a better start. Then at the beginning of April I hurt my back very badly. After going through the usual ‘it will be ok in a couple of days’ process it was clear it was going to be a little longer. Long story short, 4 months later, only 10 days cragging under my belt, we where in the Dolomites. Good job the other two are fit. 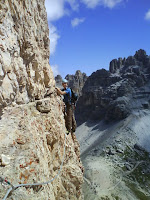 After driving for two days we decided to get the muscles moving on an easy route and see how we were climbing together as a three. We chose the South Face (Cassin Route) VII- (E2) on the Cima Picola. This is a short route at 300m with some good climbing and excellent situations. The perfect warm up and one I would recommend to people who are thinking of climbing in the Dolomites. All went well, as we moved quickly up the route with only a little bit of grip at the loose bold sections. Even the decent went well with only one minor rope jam in the 6 or so abseils down the rubble filled chimney, Result. Once we had packed the kit away we headed over the shoulder to have a look at the Cima Grande North face. It was just as big as I remembered from my last trip here, and from the look on Neil and Johnny’s faces it was a lot bigger than they had thought. With nervous excitement we were psyched to return tomorrow. 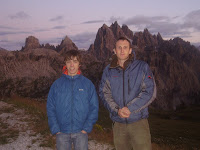 Thursday morning saw a 4 am start and an excited walk around to the route. We were the first people there and got started straight away. We had a mix of topos that I had found on the tinterweb, all of which where not overly clear about the starting two pitches. I started and thought that I had linked the first two pitches and belayed below a good looking pitch, pretty happy to be on the move. The others came up quickly and Neil took over for the next stint. After another pitch and a half the climbing was suddenly much harder than it should have been. Even after mine and Johnny’s helpful comments to push on and man up, Neil was back at the belay. It appeared that we had wandered onto the Super Directissima. A little harder than planned at E7. A quick retreat and a rather bitty chat with another Italian climber and we had the right direction, over there! Very helpful. We headed over there but things still didn’t go to plan. So we bailed, with the view of coming back tomorrow and going the right way, simples. 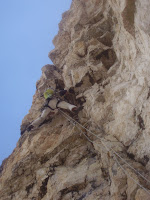 A less enthusiastic 4 am start and an even less enthusiastic walk back to the route saw us ready to start again. We all felt a little pressure to get up the route and this made things a bit more focused. Armed with a better sense of direction I ran up the first pitch. The second pitch involved easy but bold climbing that went sideways, down, then up. No wonder we got lost. After this things became a lot more obvious. We made very good time, block leading and climbed at the same time as two seconds. After what seemed like a very long E5 already, we arrived at the crux section. Johnny did a sterling effort linking a solid 6b pitch into the first 7a pitch. After some hard sustained climbing he ran out of quick draws short of the belay. This gave us all an atmospheric hanging stance. I took over and did a short section to get us to the main, better belay. From here Neil went into over drive, leading the next three hard pitches. A truly inspiring thing to watch as he power screamed his way though some extremely tiring sections. Things eased off after this but tiredness and frustration at the never ending final sections caused some entertaining mood swings. I earned my keep on the last five or so pitches which took in some bold and less solid climbing to take us to the top. With not much daylight left, cloud coming in fast, we needing to descend quickly. This proved to be a bit difficult. It appeared that only one of us had remembered to bring a head torch. We managed to descend the abseils with the help of a French couple, but with no head torches the down climb sections were too dangerous. This was the first time I have been benighted, and hopefully the last. After a very long and cold night with much manly hugging to keep warm, the light came back and we could pick our way down the descent. By 7am we had made it back to the car and could finally get some food, but what an experience. 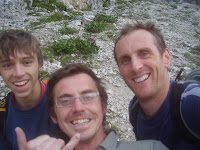 After a rest day and some fishing we decided to leave Italy and head to Austria. Johnny has the world cup coming up and needs to do some hard sports climbing to train. He had heard about a valley called Zillertal near Innsbruck, so off we went. It was a Sunday when we drove over, thinking that this popular tourist valley would have many tourist info office to help point us in the right direction. NO! It would appear that they don’t do Sunday. After driving around for about three hours looking for crags in this Austrian Mecca of granite sports climbing we decided that another rest day was not the worst thing. Next day we had more luck at the tourist info, but no luck at the climbing shop. Looking through the window we could see all the guide books on the desk, but the shop only opens 3pm to 6pm (what is that all about). More frustration and pastries later, we were 30 euros down but new where we headed. I have forgotten to mention that it also appears to rain all the time in Zillertal. So, having found some steep looking crags in Ginzling, we finally got on some rock. The climbing was awesome. Due to everywhere being mostly wet, even though the weather improved as the week went on we climbing in Ginzling the whole time. This was no bad thing. There are many sectors, but we where based in the Bergstation. Sector By The Way provided some good routes to warm up on, as well as breaking up the trudge up the hill to sector Sterne. Despite the climbing being very burly and bouldery, we all enjoyed it. Johnny flashed a hard 7c I was working and made very short work of his first 8a+. Neil made a quick ascent of 7c and worked a number of harder climbs. I even managed to on sight a hard 7a+, which felt like something special after the preparation I hadn’t had for the trip. The final day climbing before the drive back saw us doing a little bouldering. With no mats and some bad landing we didn’t push things out. It only when you climb on the boulders you can see how this would help on the routes, a good way to get used to the rock and climbing style. 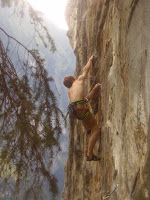 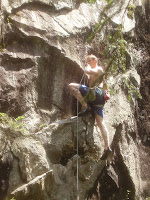 Overall, a successful trip with some excellent climbing in fantastic setting. Defiantly recommended.

Thanks to my sponsors Edelrid for great kit.
Posted by neil mcgeachy at 08:14