Rachel Carr is a very talented young Edinburgh based climber, who has recently taken the junior competition circut by storm. She has only been climbing for 2 years, but has already made an impact on the national competition circiut, achieving 1st place finshes in the Scotland South Youth Climbing Series(YCS), the Scottish Championships and the British YCS finals. She also recently managed to achieve a 3rd place in the British Team European Youth Championships Trials event and the only thing that prevented her from gaining a slot on the British Team at the Europeans was her age. However, she is well on the way to achieving a slot in the 2010 world cup squad. I recently caught up with her before one of her training sessions and asked for some inside information on how she has become so good. 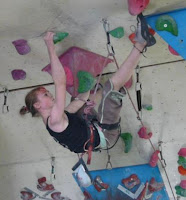 How long have you been climbing for?
I joined Rocksters in November 2007, but started seriously when I joined BRYCS February 2008.

How did you start climbing?
My mum’s friend Cicci took me climbing and I was apparently really good so I kept going once a week to Rocksters.

Where do you train?
EICA:Ratho mainly, but I also enjoy visiting other walls such as Alien Rock in Edinburgh and Extreme Dream in Aviemore.

You were a gymnast before you started climbing, do you think this helped you?
Yes it’s made me more flexible and also helped me with some balancing skills.

What is the YCS?
Youth Climbing Series, it’s a climbing competition for children age 8 to 16.

Who should try the YCS?
Anyone who thinks they would enjoy it.

You were the 2009 YCS British Champion, how did you prepare in terms of training for this competition?
I went climbing 4 times a week and focused on the type of climbing I expected to be in the competition and built up my strength, I also ate healthily in order to give me more strength.

Have you ever climbed outdoors? Where?
Yes I’ve been to Malham cove in Yorkshire, Rosyth quarry just outside of Edinburgh and others places with the Quickdraw Climbing Club. I also climbed in Krabi (Thailand) this year as part of our summer holiday.

How does this compare to climbing in doors?
It’s different and can be more technical because it’s not as easy to plan your route.

What future ambitions do you have within the sport?
I would like to make it on to the British team, compete in the Europeans and hopefully the Worlds in 2010.

Do you have any tips for other young climbers that want to improve and do well in competitions?
Focus on doing well yourself and not how others are doing. Don’t be afraid to go for competitions and have fun.
Posted by neil mcgeachy at 03:43