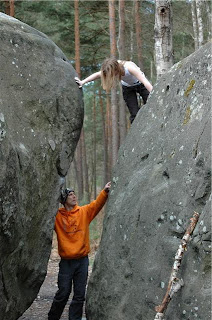 I am so lucky. Neil Gresham asked me to join him and his group for a whole week of coaching in Fontainebleau in France. I went with my mum & dad and we flew to Paris and then drove down to the gite we would be staying in with Neil and the others. We arrived on Saturday night after getting stuck in traffic around Paris, I was also very nervous because the rest of the group were all adults and I only knew Neil. Neil had two other coaches with him, Steve and Shaun. That night Neil introduced us to the group and explained a bit about what we would doing over the next week. Everyone was very excited – especially the adults who couldn’t get to sleep that first night.

On Sunday when we woke up it was raining but that didn’t stop us and we went off to Couvier to tackle our first boulders. I had never seen anything like the huge boulders we found, they were huge... and wet and slippery but we still managed about three hours climbing and it was fantastic, I didn’t know which boulder to try first. We got back to the gite and after we had our evening meal Neil, Steve and Shaun showed us the video of our climbing that day and pointed out our faults. It was a bit embarrassing but everyone learnt something.

The next morning it was sunny and I was even more excited. I ate lots of pain au chocolate and we headed for the forest!! At first the boulders were a little wet and so we looked around and checked them out while they were drying. When we started to boulder it was amazing, it is so different to bouldering indoors, I definitely prefer bouldering outside. The boulders are really technical and have REALLY small footholds so you have to be very balanced when you are on them. Before you get onto a boulder you have to arrange your crash mat into the right place depending on the angle of the problem, clean your crash mat with your towel, clean your shoes with the towel or your feet will slip off REALLY easily. Then you're off!!!!!
My climbing buddy today was Becky, who is a very good adult climber, she really nice and we give each other pointers on each problem and advice on how to tackle it. Shaun, the trainee coach, was great to work with and really helped me on the harder problems in Font. By 5pm my feet were killing me and I had to go back to the gite. I was exhausted by the time we were finished, after 5 hours training. That evening Neil showed us more video footage of the day going over general things we were all doing incorrectly and also individual points to work on.

The following day we went to Franchard Isatis and Franchard Cuisiniere, they were only a 10 minute walk in between and were both amazing!!! The problems are colour graded from white to yellow to orange to red to black to white again. I had a good morning and completed 10 red problems and nearly did a white problem (the hardest level). After about 2 hours it started lightly raining so we walked down the road to Cuisiniere. After warming up on a few slabs and trying a few red problems I asked Neil, if I could try something harder so he showed me an overhanging, reachy and awesome problem!!! I chose a sequence and brushed the holds. I was ready to try it! I had my first go and fell off just after the middle bit, it involved lots of heel hooks and big reaches. After I knew I could do the start of it I tried it from a standing start but I noticed there was a huge dyno to the next hold so I tried different places to put my feet and finally got it from standing start. My fingers were really red and nearly bleeding! Neil said I could have tried to join it all up if my fingers had been undamaged but said I shouldn’t because the skin was so thin. I still tried it because I had worked so hard on it but unfortunately fell off at the huge dyno. After that problem I climbed some reds and blues because my fingers were really sore. Not only me though, all the adults were suffering too.

On Thursday we went to a place near Noisey. It was beautiful, as good as all the other places we have been to. Although everyones fingers were still red raw and some were even cut we still had an amazing time. To warm up we did this really hard crimpy slab, after two goes I got up it, and so did Becky. It was very hard and was even harder if you had finger tape on. I didn't feel very warmed up so I tried another slab but I think I warmed up my throat more than my body because 3/4 of the way up there were two lizards, I screamed when I saw them because they gave me such a fright but I went to the top anyway and climbed as fast as I could on the way down!!! I was warmed up after that so I asked Neil for a harder problem to work on so he took me to this reachy, overhanging, juggy problem. It was a kind of traverse then it went up at the end. I really enjoyed this problem.

Since it was April Fools day, the night before Viv and I planned some tricks that we were going to play on Neil for a joke. The first one was putting flour in his chalk bag, it was really funny when he put his hand in and found out it was flour! The second one was when he was showing us a boulder problem we put big sticks and two pine cones in his chalk bag, he got a fright! The third and final one was placing a very heavy rock at the bottom of his climbing bag so he would be carrying extra weight when he lifted it up!

After all the pranks I got back to climbing and Neil set me another challenge, it was another reachy problem with no footholds! We joined in with some German women and used their crash mats. I had my first go and got to the same place as they did. My second go I got to the same place again, came off and went over on my ankle because the rocks underneath the crash mat were uneven.
I watched Neil do a very technical boulder problem then had to go home. My ankle was really painful!

Every evening Neil, Steve and Shaun would give us feedback on the days climbing, giving us individual comments and more general comments using the video footage. On the Friday it was raining and we couldn’t climb, my ankle was still sore and so I couldn’t climb anyway. Neil gave us a talk on training and diet and then we all had private feedback from the three coaches which was very scary. I was last to go through and so had to wait for about 2 hours. Because my ankle was sore Neil gave me a piggyback, they were very nice and gave me lots of helpful feedback.

I absolutely loved my week in Font and hope I can go back very, very soon. Thanks to Neil, Steve and Shaun I learned so much and would love to do more outdoor bouldering. 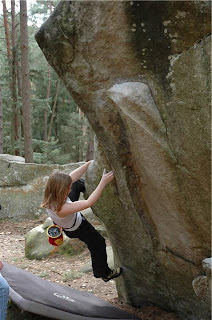 Gabs is sponsored by La Sportiva & would like to thank them for providing her with shoes for this trip!
Posted by neil mcgeachy at 04:15 3 comments: