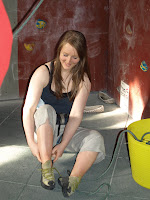 This weekend sees EICA: Ratho hold the Edinburgh Round of the IFSC European Youth Series (EYS). One local climbing star that will be hoping to make an impact on her international debut is Cowdenbeath based climber Jaime Davidson. Jaime is a product of the EICA: Ratho Youth Program and has been rapidly progressing through our various kids climbing clubs on her way towards international competition over the last 6 years.

Jaime is still only 14 years, but has already build up a sports climbing competition C.V. to be proud of, with a long list of achievements most climbers could only dream of. See below;

This weekends EYS presents Jaime’s biggest competition challenge to date, with the prospect of testing her skills against all of the top junior climbers from across Europe. As her coach and someone who has witnessed at close hand how well this talented young girl deals with pressure, I have every faith that she will rise to the occasion and make everyone proud! Jaime is definitely one to look out for, not just in this round of the EYS, but in next years Youth World Cup in Edinburgh and other international climbing competitions in the future. If you want to show your support to British Team this weekend, make your way down to EICA: Ratho and cheer them on.