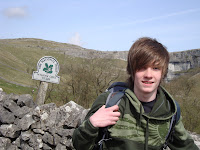 I first met young Paul Williamson ('Glasgow Paul') around 5 years ago, when he came along to our Saturday BRYCS club. It was very apparent from day one that he already had 2 of the most important traits required to succeed in climbing – 1. a determination to push himself, and 2. mutant strong fingers!

Paul has progressed through the ranks as a climber over the last few years with some impressive results in regional, national and international competitions. Five years on he is very much established him self as one of the most talented and promising young climbers on the British Competition Circuit.

Paul's talents don't stop at just plastic pulling either. Ever since a very successful first outdoor climbing trip to Orpierre in 2006. He has gone on to tick some very impressive climbs throughout Scotland, Britain and Europe. He is now also very much established as a member of the 'west coast dumby squad' and is well on his way to maintaining the Dumbarton tradition of pushing Scottish bouldering standards forward to new levels. Just a pity he is a Celtic fan!


Future ambitions;
to climb in the Buttermilks in California
hopefully do some pretty hard boulder problems
to climb F8c one day (maybe at Dumbuck?)
to climb the Overlee project, (V very hard!?!)

Paul has recently been selected to represent Britain in the up and coming Kranj round of the European Youth Series. Good luck dude and get stuck in!
Posted by neil mcgeachy at 12:21