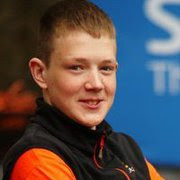 My name is Calum Forsyth. I work and climb at the Edinburgh international climbing arena (Eica) in Ratho, just outside Edinburgh. I have been climbing for about 8 years now and have done many competitions, these have been mainly regional and national, including the Youth Climbing Series and British team trials. I have now competed in three team trials, in the previous two I have finished in 6th place and 8th place. the most recent team trials I entered was on the 27th November 2010, at Awesome Walls Climbing Centre, Liverpool,. This was my second trip to this wall.
Earlier this year i suffered an injury to the growth plate in one of my fingers in my right hand, at the time i was gutted, i was climbing well and all i wanted to do was continue, but, i soon realised it wasn't doing any good and i had to think of the long term effect it would have had if i continued to climb whilst not 100%. I set myself a goal of returning to climbing and aiming for the Team trials. I knew I had 6 months to get strong and fit again but I knew it wouldn't be easy and I was right! I was so determined to do well in the team trials, i gradually built up my training programme, I trained 4 times a week with Gary Vincent (Gaz) and the master as we know him, Neill Busby (Buzz). Throughout the six months I found it really hard to stay focussed but with two really great guys spurring me on it was easy to stay motivated and best of all psyched.
As the comp grew nearer my training decreased to easy climbing so not to get tired and injured. I kind off struggled with that one, i wondered why the climbing was getting easier, it didn't seem right but Gaz and Buzz convinced me it was the best way.
On the Friday the day before the comp my parents and I travelled down to the hotel we were going to be staying at. After a 4 hour journey we arrived in Liverpool we met up with a few other people who made the long travel south such as Nikki and Steven Addison (coming from Inverness 7hrs!!!!) , Olivia and Gabriella Stewart, Megan Sanders, William and Alexander Bosi,and Rachel Carr who all climb at Ratho on a regular basis.
The morning of the competition was obviously a nervous one as I didn't have a clue what to expect, the comp routine probably always the same but for some reason it never seems to workout that way! So after breakfast we headed off to the wall for registration. At the wall we were met by Rob Adie and were told what to do, sign in, collect our competition number and our t-shirts (yellow!). Then I was straight off to see what climbs I would be doing. The first route was around 18 meters high on the side wall which started off with two massive orange holds and suddenly it went into the most crimpy route I had seen in a long time and that's when the nerves got worse, bit i convinced myself as it was not very steep climbing, so I should be OK.
On the other hand I looked at my second route and it looked like it was set by the master busby as it was on the steep wave at the back of the wall it was a very awkward looking sequence but as to most of busby routes there is a hard way and an easy way the hard part was finding the easy way of doing it. I had no idea of what number I would be climbing as it was still yet to be decided on in the first route.
When it came to the first person climbing the orange I was watching closely to see how he made the moves and when he fell of I was worried about the grade of climb and then didn't focus on the other three climbers before me as I was so nervous so I went to warm up for 20 mins just trying to stay warm and not get pumped then it was my shot at the climb which had already spat of four other people so I was worried about getting started but after the first few moves I was back to my usual self blanking everything out and whistling to the music in the background as I do to focus my self there was one part of the route everyone kept falling of and I was thinking to my self I no I can't fall of if I want a good score, so I decided to not clip and get to the next good hold before reaching down and clipping and it worked for me so I fought on to the top.
I was so psyched that I had completed the route, but it was now on to the next climb. All I had to do now was wait and see how the other 16 competitors got on before seeing were I would place on the next route. After the results were posted I was only one of eight climbers to do this route and would there for climb on the 2nd one eighth as I was first to top out.

The second qualifier was an awkward looking route which was set by Neill Busby who also works and climbs at ratho. It was on the steep wave wall at the back of the church it started on the corner side of the wave on quite large holds but most of the route was on rubbish holds with a lot of awkward foot placements that were key to doing it. As it came to my climb I stepped up and didn't look at the route before jumping onto it as I just wanted to climb and of I went on this crazy looking climb that was technical from the off the first crux in this route was about five clips up were you had to traverse across this steep wall into a corner and clip then I realised that I was able to double clip which meant less hanging about on small holds trying to clip. After snacking out for a wee bit I then had to make my way across to this big heel hook to balance my self out and pull up for the next hold so after all of that I was totally pumped and was determined to stay on the wall so I fought on until the second last hold before falling off. 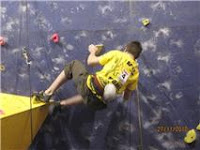 Despite not topping out, I was extremely happy with my efforts on this route and I think Buz was as well, he congratulated me on my effort and asked what I thought of the route I replied "it was rubbish!!!! (i told him i was only joking and it was in fact a really cool climb). So all I had to do now was wait and see were I would finish or if I would make it to the final. Once everybody had tried route 2 it was time for us to wait around 20 mins to see who made the finial. When the results were posted, there were 10 people going through and sadly the other 9 didn't quite make it. To my surprise I made the finial in 7th place and was so psyched.
Once every competitor had finished we were told we had to be in isolation for 1400hrs, if we were late we wouldn't be allowed to compete. This gave me 30 mins to get all my kit and food together before going down into the bouldering cave which was used as isolation. At 1400hrs we were told that viewing for our route would be at 1430hrs as this 30 mins gave the route setters times to change the routes a little bit. After viewing we were sent back down into isolation and told the running orders of the categories and low and behold my category was out last which gave use 3hrs in total doing nothing apart from trying to find ways to stay occupied. I think isolation should become an Olympic Sport in its own right because its sooooooooo hard!!!!
As I listened to everyones name being called out I was bored beyond belief but I also knew it was getting closer to my turn to climb. Most of all I just wanted to go out and climb (i'm not the best person to keep locked in a room for 3 hrs) I spent most of my time making up stupid boulder challenges with the other competitors who shared my pain. After 3hrs it was my turn to take to the stage on a very hard and incredibly awkward route set by none other than Tom Randell. I had climbed a number of Toms routes at the BLCC's so I knew it would have a lot of heel and toe hooks in it and low an behold there was! 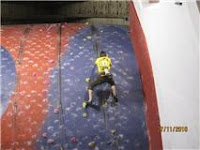 I started this climb as any other, I walked straight out and did what needed to be done which was climb. I climbed the first few moves with a few mishaps but held in there as long as i physically could before making such a bad error by wrong handing myself. I was disappointed because it was a stupid mistake and not a technical or physical error it was my own stupid mistake. I wasn't going to get worked up about it as I made the finial which was already my biggest achievement of the day. After watching the other people climbing the scores were in and calculated. After the scores were posted it was quite a surprise on how closely packed the category was. As the results were posted I was named in 9th position which I thought was very respectable given the time scale I had to train for but I couldn't have had a better time competing. It was also great to meet up with people again, funny sport this climbing thing, meet and greet lots of fab people.
Posted by Neil McGeachy (MC Geek) at 03:32